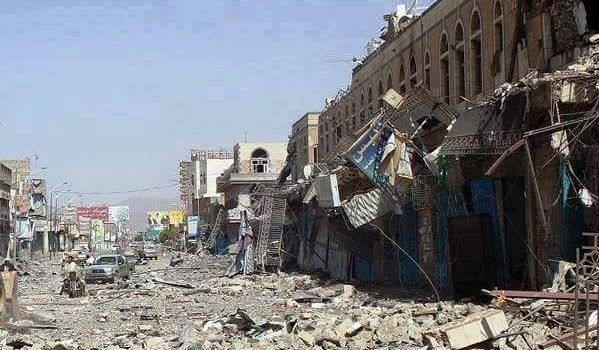 The havoc and destruction are the first scenes shocking a visitor coming from the western entrance of the besieged and war-torn City of Taiz over the war is being waged by Houthi-Saleh's militias on the whole governorate.

At once very crowded al-Morour Roundabout, one finds himself stuck on the ground as his eyes stare at the horrific scenes; destroyed buildings, burnet flats and havoc manifest everywhere.

Heading further, especially towards highland quarters, a visitor sees only destruction, burnet houses, havocs and rubbish dominating the scene. Entering the city or driving inside its quarters remains a risk to any visitor.

"A shell fell on a car in motion, killing the driver and his family", said Mukhtar Abdullah, a gold seller at the 26 Septermber Street, the commercial zone in the heart of city. He explains that living inside the city, even after regaining it from Houthi-Saleh's militia, is still a risk as Houthi-Saleh militia shell the city almost every day by Katyucha and artilleries from hills overlooking the city from its east.

One day a shell fell in front of my store and I took a shield behind a concrete column, said Mukhtar, whose father was killed at the same shop by shrapnel of a shell in a separate similar incident. Shortly afterwards, he said, the street was crowded with people and shoppers offering help.

We do not have other way to feed our children but to re-open our shops, he said, "we are forced to work under these risks, what else can we do?"

Although 90 percent of the city has been freed from the militias yet and is under the military forces and people resistance, the majority of neighborhoods are still empty of inhabitants. Damaged houses, regular shelling and lack of services are the reasons hindering people from returning to their houses.

However, some families prefer to stay in their houses for they do not have other choice to avoid troubles of displacement or the given fact that if they abandoned their homes, they would only tempt looters after retaking the city.

The house of my son has been looted and looters did not leave anything in it, said Om Anwar, a widow in her fifties. Looters have even deranged windows and doors and sold them, she said, adding then we got them back by money.

Om Anwar and her relatives and a neighbor met by Saba are living at Tha'bat, the most exposed quarter to the daily shelling by militias. It is located on a highland beneath the tallest Saber Mountain overlooking the city from the west.
Snipping citizens

Saba investigated the credibility of sniping reports, and the fall of children and women Almost all the interviewees testified that the militias target any moving object. .victims

"If there is a cock in the area, it is targeted by snipers," said Abdullah Mohammad, an owner of big carpentry workshop who lives near the frontline at Hawban, the eastern entrance of the city where the militia are positioning at the hilltops and exercising their lethal job.

One day they shelled a popular market from the nearby hill and killed and injured dozens of innocent shoppers. "They want to terrify the people through these acts to surrender," said Mohammad. "A passerby woman was sniped and died immediately for no reason but went out for buying something," he confirmed.

After being pushed from the city and mainly in recent liberated neighborhoods located on highlands, like Tha'bat, Masbah, al-Askari and al-Jahmalia, Houthis are doubling their aggression on these quarters. Although they are completely damaged, militias continue their daily shelling on them and snipers are continuing their job.

"Beware there are shelling from time on this place and snipers are targeting people crossing the quarter," a local warned Saba reporter while driving up the upper part of Thabat Quarter for photos.

The neighborhood is wholly bombed and if there are high buildings still standing, they are badly damaged.

The neighborhood's residents and residents in other quarters agreed that the majority of the victims of the snipers are residents or passersby and children are the most vulnerable persons.

When shooting, snipers aim at the victim's genital organs, a signal that they want to dysfunction people's reproduction and create a shortage of offspring.

The majority of the killed or injured people were found hit on their backs or genital organs, said Mukhtar.
Relief activities

Despite the miserable conditions the whole governorate suffer, international aid agencies and regional and local organizations are not doing well to help the hungry people inside the city or the internal displaced people, who are forced to live in camps in the countryside.

As not all people have access to international aid due to the militias' siege they impose on the city, philanthropists, who are big traders and merchants from the governorate living abroad, are filling the gab.

Philanthropists send their aid funds to well-famed local organizations, heads of quarters or mosque preachers who
distribute these relief and aid assistances to neighborhoods. But there is still big gap in terms of providing enough relief.

"The main problem facing locals in the city is lack of cash," said Najeeb Hamoud , who lives with his wife and a little girl at al-Jomhori Quarter, which is one of the high neighborhoods witnessing regular shelling and sniping." locals need money to buy other necessary things families need," he said, adding that people sometimes sell portions of their shares of relief or aid assistance to get money for buying urgent things like children nappies.
Prolonged war

The majority of the interviewed people inside and outside the city complain from the prolonged war as their suffering complicate with the continuation of the war, especially those who have big families who used to have businesses inside the city and suddenly found themselves refugees in small houses in villages or inside tents.

"Every day passes, I feel I will be exploded from the status quo," said Yousof Abdo, who has been operating a carpentry workshop in the city along with his five sons, three of them are married. Yousof and his offspring, including the families of his sons, all moved to the old house of the father in the village to share his brother living at.

The Taizi people are bearing the brunt of Yemen's war and see no foreseeable end to it. The lack of hope pushed people to turn conspiracy theorists who believe the warring factions themselves don't want the war to end, for unknown reasons.

"The director of the war film wants this," said a leader of Taiz people resistance while in a private talk in a funeral for former comrade of people resistance. He answered a question on why the war takes this long to regain Taiz.
Civil servants, city defenders without salaries

The fact that the past salaries of government employees in Taiz are largely unpaid is another major reason for people suffering. They have only received a one month salary of the past eight months. It was not enough to buy Eid clothes and food for their children.

Soldiers and people resistance fighters in Taiz complain also that their salaries are withheld for months. While civil servants quitted going to their jobs, soldiers and fighters of people resistance started to drop out from warfronts searching other chances for livings. This could be another reason why the ware has become in a stalemate, not only in Taiz but also in other warfronts.

I cannot stay any longer fighting without receiving payment, I have a family needs food and clothing, said Anwar Abdo, people resistance fighter who left warfront for finding another opportunity to earn his living.

Soldiers and employees are seen organizing protests and burning tires at big and main streets of the city to demonstrate their bad need of overdue salaries. They force drivers to change directions or stay until they finish their angry protests.

"We spent Eid holiday without money and new clothes while you enjoyed it," said an angry protester when he was asked about reasons of blocking Gamal Abdulnasser Street at the city center, asking drivers to change their directions.

Asked about reasons of not paying fighters, the people resistance leader said they are trying hard to get salaries for fighters from the government but with no avail. But he said commander of people resistance collect money from special sources and

share them with their fellows. On the leak of fighter from warfronts, he said there are rare cases have not become common.
Lack of security and prevailing chaos

Lack of security and spread of looting and repeated clashes are the second major challenges faced by locals and returnees.

We cannot bring our jewelry and resume trade in the stores, said Mohammad Saif, a son working at his father's jewelry store located at 26 September Street, which the largest number of jewelry stores as a well-known street. Mohammad and other shop owners fear of armed looters. He makes business of buying second-hand gold to be recycled or for re-sale.