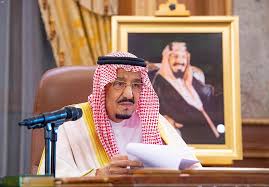 RIYADH - SABA
Custodian of the two Holly Mosques King Salman bin Abdul-Aziz al-Saud, monarch of the Kingdom of Saudi Arab (KSA) said" the Iranian regime's inferences in Yemen through its affiliated Houthi militia's coup against the legitimate authority resulted in a political, economic and humanitarian crisis which the Yemeni peoples have been suffering, and it constitutes a threat to the region's countries and vitally important water passageways for world's economy".

He went on saying" The militia did not respond positively to the truce efforts and the announcement of cease-fire by the Arab Coalition in last April in a response to the UN's call for a nation-wide cease-fire to devote the efforts to control coronavirus, the militia until now is continuing to carry out attacks on the civilians in Yemen and the Kingdom".

King Salman stated that the Kingdom will firmly defend its national security, will never abandon the Yemeni people alone, it will continue to offer necessary support until the country restore its sovereignty and independence, get rid of the Iranian hegemony. He reiterated the Kingdom's continuous humanitarian support for the Yemeni people, and it will keep on supporting the efforts of the UN Special Envoy to Yemen to make peace based on the GGG's Initiative, outcomes of the National Dialogue and the UNSCR 2216.

The Custodian of the two Holly Mosques noted that the Iranian regime targeted the oil facilities in the Kingdom last year in a flagrant violation of the international laws and aggression on the international peace and security, it has also continued to target the Kingdom with ballistic missiles that its number exceeded 300 missiles and over 400 unmanned drones in blatant breach of the International Security Council's resolutions 2216,2231.

For peace in the Middle East, the Custodian of the two Holly Mosques said " Peace in Middle East is our strategic option, we should work together, save no efforts to achieve a bright future in which peace, stability, prosperity and coexistence among all the nations in the region are prevailing".