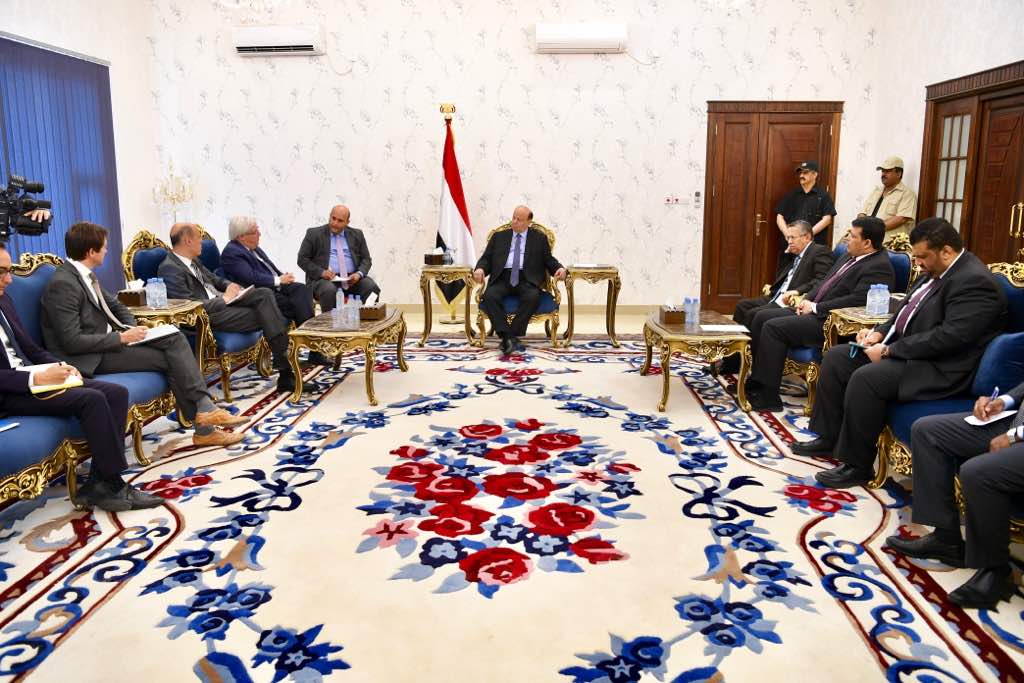 ADEN-SABA
President Abd-Rabbu Mansour Hadi received Tuesday in the interim capital Aden the Special Envoy of the UN Secretary General Martin Griffiths and his accompanying delegation. It is the second tip for Griffiths to Aden. Prime Minister Dr Ahmed Obeid Bin-Dagher was in attendance.

President Hadi welcomed the UN's envoy, praising his good offices for peace that is based on the three terms of reference: GCC's Initiative, its operational plan, National Dialogue's outcomes and International Security Council's resolutions in relevance, namely 2216.
The President has stated that he is very keen on making peace as it is in the interest of the Yemeni peoples who are eagerly seeking for stability. Likewise Arab Coalition member states are interested in establishing peace in Yemen.

President Hadi blamed Houthi putschist militia leaders for the prolonging conflict." The putschists don't understand the conception of peace, they just ostensibly agree to negotiate peace settlement whenever they suffered setbacks in order to buy more time to plant landmines and cause more destruction and suffering for the Yemeni people", said the president.

The President cited the ordeal of Hodeidah's population because of the Iran-backed Houthi militia's atrocities that has taken the advantage of controlling the seaport to smuggle weapon, squander humanitarian aids and devote the harbor's revenues to prolong its war against the Yemeni people, moreover their repeated attacks against international marine navigation and disturbing neighboring countries.

For his part, the UN's envoy said" We would work on consulting with different parties to crystallize potential visions which may be in conformity with the peace's terms of reference and with special focus on humanitarian aspects at this stage".

The President's meeting the UN envoy came up with a number of ideas that Mr Griffiths told the reporters about in his statements to media." We held fruitful session with His Excellency, the President and we focused on humanitarian aspects throughout Yemen, we talked about releasing all prisoners and detainees from different parties", said Griffiths.

President Hadi has set up a committee to be supervised by the Prime Minister Dr Ahmed Obeid Bin-Dagher to crystallize the ideas about the consultations that should precede any direct negotiations between the parties, and study any suggestions may be put forward by the UN's envoy.