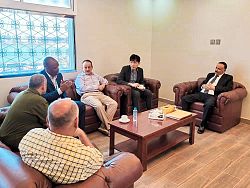 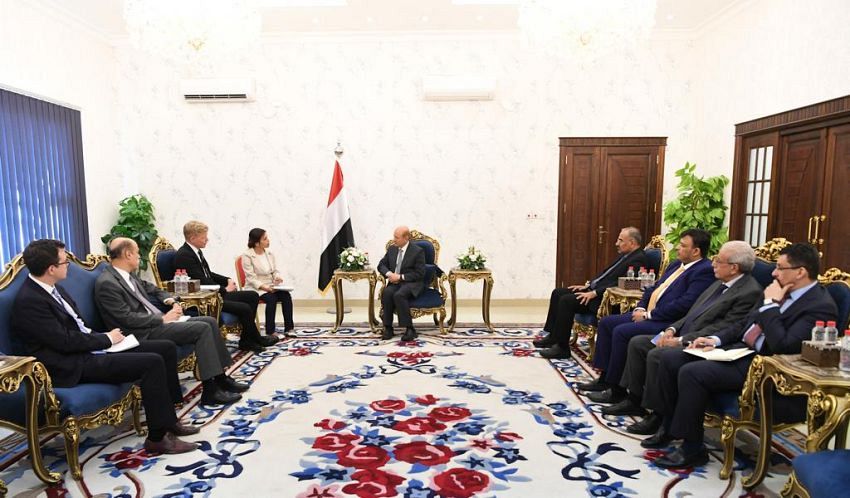 Aden – Saba
His Excellency President Dr. Rashad Muhammad Al-Alimi, Chairman of the Leadership Council, along with the two Vice-Presidents of the Council, Aidarous Al-Zubaidi, and Dr. Abdullah Al-Alimi, met today, Monday, the Special Envoy of the Secretary-General of the United Nations, Hans Grundberg, on his third visit this month to the temporary capital Aden.

Al-Alimi and his two deputies were briefed by the UN envoy on the developments of the ongoing efforts to implement the truce, and the opportunities to extend it and build on it to push the Houthi militia towards a comprehensive and just peace in accordance with the agreed local, regional and international references. Grundberg presented the results of the first phase of negotiations, regarding the opening of the crossings of Taiz and other provinces, in which the Houthi militia continued its intransigence and its failure to implement the terms of the truce related to opening roads in Taiz and other provinces in order to alleviate the suffering of the Yemeni people.

During the meeting, the President of the Presidential Leadership Council stressed the importance of pushing the militia to fulfill its obligations under the truce agreement, including opening all crossings, and paying employees’ salaries from the revenues of oil derivatives ships arriving at the ports of Hodeidah.

President Al-Alimi affirmed the continued support of the leadership and the legitimate government for the UN efforts to implement the terms of the truce, and to provide more initiatives to alleviate the human suffering of the Yemeni people, and not to compromise on any of their rights guaranteed under the constitution and relevant international laws.

Chairman of Presidential Leadership Council calls for drastic shift in handling the Yemeni issue, standing up to Iranian interferences in the region