Coalition confirms support for all efforts to reach solution in Yemen 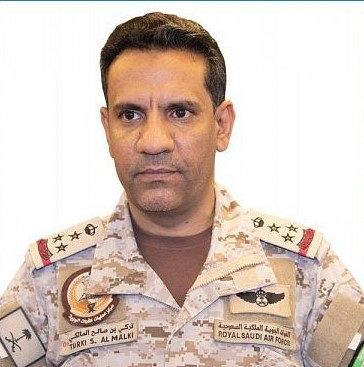 Riyadh - Saba
The official spokesman for the Arab coalition forces Brigadier General Turki Al-Maliki, confirmed that the terrorist Houthi militia has no goal other than to implement the confirmed dictates of the Iranian Revolutionary Guards and the experts of the Lebanese terrorist Hezbollah.

During a press conference held today in the Saudi capital, Al-Maliki reiterated the support of the Joint Forces Command of the coalition for all political efforts led by the United Nations under the leadership of its Special Envoy to Yemen, to reach a comprehensive political solution based on the three references.

Brigadier General Al-Maliki said, "The battle in Yemen is between peace on the one hand and ruin and destruction on the other, and peace is what the Kingdom, as a leader of the coalition, and all the Gulf states and the sister countries participating in it seek, to reach a comprehensive political solution to achieve security and stability in Yemen so that Yemen will be safe and stable and enjoying prosperity and development after suffering many tragedies due to the terrorist Houthi militia.”

He added, "The war in Yemen is an intellectual, cultural, social, military, and economic war, as is the case in Lebanon." He stressed that the coalition presented all initiatives to reach a comprehensive political solution, which were rejected by the Houthi militia. He explained that the political solution is the best solution to the crisis in Yemen, but the the military tool seeks to achieve the political goals of the alliance.

Al-Maliki pointed out that the Houthi terrorist militia continued its arrogance and intransigence by rejecting all efforts from the United Nations from 2016 until 2018. He pointed out that the coalition announced in 2018 the operation to liberate Hodeidah, which is the inherent right of the Yemeni government to liberate all Yemeni lands, securing shipping lines and global trade, due to the militia launching of ballistic missiles and drones, and using the port to store weapons.

He noted the Kingdom's comprehensive initiative that it presented in March 2021 to reach a comprehensive political solution that enjoyed the support of the international community, but the militia rejected it under the dictates of the Iranian regime, and one of the Iranian Revolutionary Guards' officers, Hassan Erlo, was leading the planning for military operations. He emphasized that the initiative is still in place to achieve security and stability for the Yemeni people. He indicated that the Houthi militias' aggression on Marib confirms their continued targeting of civilians and threatening more than 3 million displaced people.

Al-Maliki said, "The militia's talk about the existence of an unreal and incorrect siege, and that allowing relief and international organizations to move foodstuffs and oil derivatives from the port of Hodeidah to all governorates is a conditional right, as the coalition provided three alternative paths to move, which was met with the militia's insistence on controlling and exploiting them to raise war funds for the militia.