President Hadi, his board of advisors discuss developments in the country 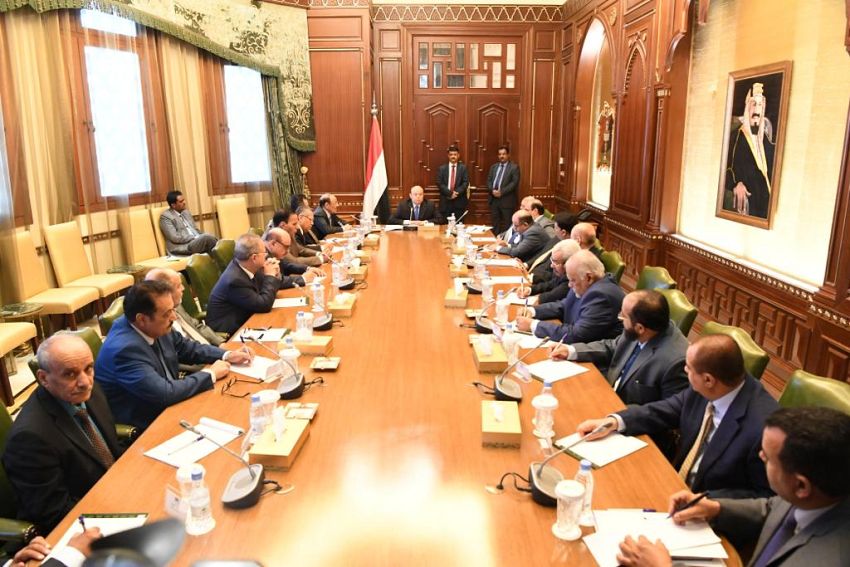 The meeting aimed to discuss the latest developments in the Yemeni national arena.

The President said" Our objectives are clear, our path is well identified through national consensus and references of peace that are based on the GCC's Initiative, its operational plan, outcomes of National Dialogue and International Security Council 2216 to eliminate the coup and advocate our Yemeni people's options".

President Hadi talked about the developments the country has been witnessing in different fields. He cited the good offices and efforts have been made by the Kingdom of Saudi Arabia (KSA) to achieve security, stability and establish peace in Yemen, besides its support for development and economy.

He said the proposal of Riyadh agreement is an addition to the Saudi noble efforts to bring all Yemeni political constituencies and forces together, join efforts and resources in a united front to achieve the main objective: put down the Houthi coup and defeat Iran's scheme and tools in the region including the Houthi militia.

The Vice President provided a brief report about the discussions with the brethren in the KSA. The talks conducted by a committee authorized by the President of the Republic, headed by Vice President, included the membership of Prime Minister, Deputy Premier and Head of the Office of the Presidency.

The committee made significant efforts to come up with the draft of the agreement which is intended to end the rebellion, return of the state and its institutions, support the legitimate leadership headed by President Hadi, put emphasize on the three terms of reference including the GGC's Initiative, its executive mechanism, outcomes of National Dialogue and the UNSCRs namely 2216.

The draft was elaborately discussed by the President's advisors who welcomed any efforts aiming to stop bloodshed and boost peace and reconciliation among the Yemeni political constituencies in the framework of the legality andgo jointly countering the Iran-allied Houthi militia's coup.

The meeting asserted the importance of joining and doubling effortsto reinvigorate the state's institutions so that the government can function effectively in the temporary capital Aden, reinstate basic services, improving peoples living conditions, enhancing the unity among the armed forces and security services.