Government approves package of measures regarding UAE's existence in the coalition 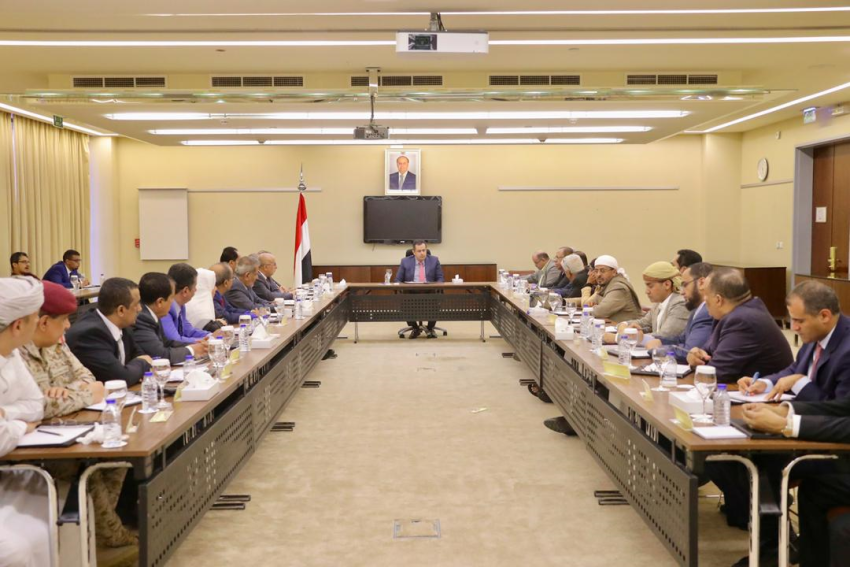 RIYADH-SABA
The Council of Ministers discussed Friday implementation of President Hadi's directives to the government for taking necessary measures for facing UAE-backed Southern Transitional Council's (STC) armed rebellion against the state and horrible crimes committed by STC against civilians.

The council commenced the meeting by praying for the souls of the innocent people and heroes of the national army, who were martyred by UAE airstrikes on populated areas in different neighborhoods in the transitional capital of Aden and Abyan province.

The council discussed repercussions of the armed rebellion and efforts of the state's institutions for continuing providing services to the people and taking all necessary measures for overcoming the aftermaths of this rebellion.

The cabinet approved a package of measures and recommendations to President of the Republic, including government's position towards the role and existence of the UAE in the Arab Coalition, confirming that the government will not accept- in any condition- diminish of Yemen's sovereignty, unity and safety of its soil.

It strongly condemned the UAE-backed STC's terrorist crimes included field killing of detainees and killing injured soldiers in hospitals, storming houses, killing individuals before their families and carrying out political arrest in the transitional capital of Aden and Abyan Province.

The government confirmed that it will not hesitate to do its duty on deterring such criminal and barbaric approach of outlaw gangs of the STC.

The Council of Ministers rejected falsified justifications made by the UAE to cover its crime of targeting the national army by its warplanes while the national army was carrying out its constitutional duty on defending Yemeni unity and fighting terrorism in line with the UN Charter and international laws.

It confirmed that Yemen has been and still active member in the international community for fighting terrorism with its different forms and that the UAE's attempt of accusing the national army with terrorism is just a failed attempt to cover its blatant and illegal air raids against heroes of the national army.

The council pointed out that continuous supply of heavy and moderated weapons by the UAE to STC's militias is considered an assertion on undermining the internationally recognized government and supporting outlaw groups contradicts the objective of the Arab Coalition's objective and the Security Council's resolutions led by Resolution 2216.

The council also denounced the stark UAE's aggression and considered creation and taking care of militiasis an agenda to the UAE forbanning the government impose its complete sovereignty on its territories and harming Yemen's unity and safety.

The cabinet stressed necessity of abiding by the objective of the coalition's formation and warned of changing it into a cover to undermine the State of Yemen and splitting it and called the international community, the SC and sponsoring countries of the transfer to shoulder their responsibilities and denounce UAE's aggression against the national army.

Praising Saudi king and his crown prince for their support for containing aftermaths of the armed rebellion, the Council of Ministers praised people integration around their political leadership and legal government and their rejection to all acts aiming at undermining Yemen's unity, security, stability and targeting Yemen's sovereignty.

The council called upon Yemeni people for defending the homeland and its sovereignty and confirmed that the government will save not effort to alleviate suffering of its citizens across the country without exception.