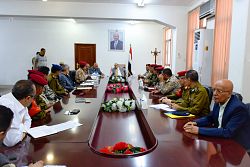 Al-Barakani: Liberating all Taiz's areas is a key issue
Parliament Speaker Sheikh Sultan al-Barakani held Wednesday a meeting for the Security Committee in Taiz discussing security situation in the city.

Cooperation between Yemen and UNIDO discussed 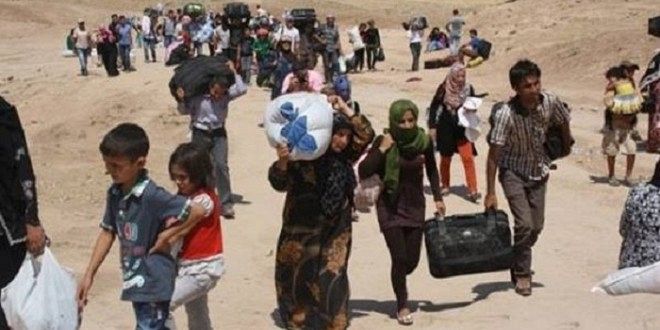 The Netherlands-based foundation for human rights in the Arab world, Rights Radar (RR), has called on the international community to intervene to save more than 3,600,000 people in Yemen's Red Sea port province of Hodeidah.

RR called for protecting civilians where armed clashes took place in the province over the past 2 weeks. Rights Radar also called for investigation into the Houthi attack on the inmates they hold in the central prison of Hodeidah on 27th June.

Here are some excerpts of the RR's statement published on their website.

"RR monitored a case of armed attack by gunmen of Houthi rebels on the inmates of the central prison in the city of Hodeidah, at 10 o’clock on Wednesday evening, June 27, where an armed vehicle, accompanied by two medium-sized cargo vehicles, stormed the central prison courtyard and attempted to forcibly transfer prisoners to unknown locations. When the prisoners rejected orders for fear of being transferred to the Houthi fighting fronts, they were physically assaulted and this developed into live ammunition, killing two prisoners; one of them is above 70 years old, while more than 20 others were injured either by beating or tear gas.

Sources from inside the Hodeidah central prison said to RR that Houthi gunmen isolated some prisoners after this incident occurred and practiced severe torture against them on charges of rebellion, while the fate of some prisoners remains unidentified. Dozens of prisoners have been forcibly transferred to unknown locations where they are feared to be used as human shields or to be transferred to the Houthi fighting fronts.

RR received a statement from families of the inmates of the central prison in Hodeidah appealing to human rights organizations and the international community to protect the lives of their imprisoned relatives, from which they described as persecution inside the Houthi prisons. They revealed that the day after the prison incident, they were prevented from bringing medicine and food to some inmates and that is threatening their lives.

"On Wednesday, June 27, at least 7 civilians from al-Ja’abali neighborhood, next to the fence of Hodeidah airport, were killed by a mortar shell fired by the Houthi militants.

"RR called on the international community and the United Nations in particular to put an end to the suffering of the IDPs of Hodiedah province and to play their responsible role towards protecting civilians in Hodeidah, as a moral obligation under the principles of the United Nations, towards the residents of the armed conflict areas.

It also called for an investigation into the armed attack on the inmates of the central prison of Hodeidah and to protect the prisoners from any threat and danger that might affect their lives."