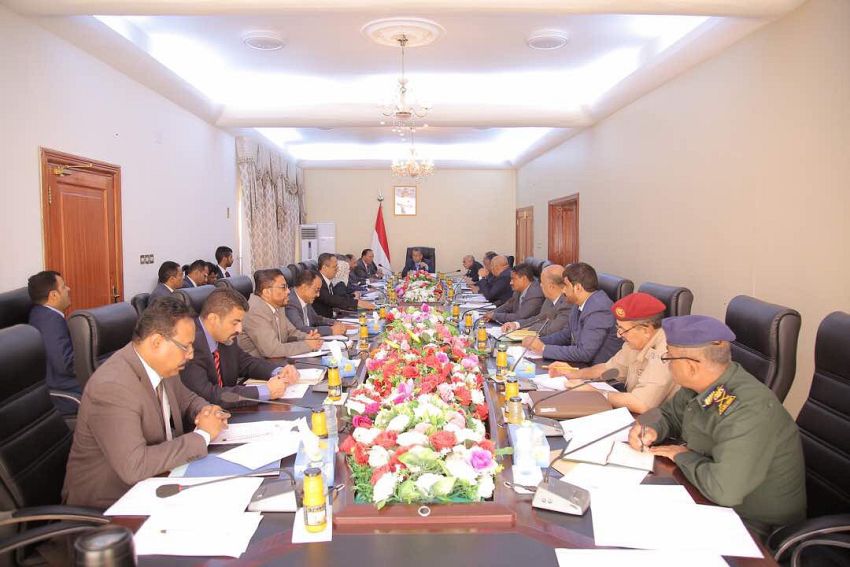 The Council of Ministers confirmed keenness on permanent and just peace based on the basic references; GCC Initiative and its Executive Mechanism, the outcomes of the National Dialogue Conference and the UN Security Council's Resolution 2216.

While the council praised great sacrifices made by the army with support from the Saudi-led Arab Coalition in different warfronts facing Houthi-Saleh's militias, it hailed efforts exerted by the government's delegation for restoring order in Taiz and re-opening some institutions.

Prime Minister confirmed that the government is struggling to provide basic services to citizens in different provinces despite difficult situations the country is going through over barbaric war waged by Houthi-Saleh's militias on the state. The government has succeeded in providing some services in fields of electricity, health, water, roads and reconstruction.

He also confirmed that the government, with directives from President, has issued orders for paying salaries of affiliates in the army and security forces and work hard to regulate handing over salaries despite capability shortage.

The ministers were briefed by Minister of Civil Service AbdulazizJubari on military, security, economic and health conditions Taiz is experiencing under severe clashes with rebel militias. Jubari confirmed support of Taiz warfronts for beating the enemy and urged on supporting health sector and activating health centers in Taiz for alleviating burden on the government of sending the injured abroad.

The council confirmed continuous support for enhancing the role of the local authority, providing services and treating Taiz as liberated province, noting to previous support of providing YR 500 million for rehabilitating al-Thawra Hospital and other SR 5 million for the general security.

The ministers called upon people of Taiz for unifying the media address that servesliberating the province from the rebel militias and denounced the criminal and coward ac by the rebel militias for targeting the convoy of the government's delegation while in way back.

The Vice of the Chief of Staff Saleh al-Zandani provided a review on the military conditions in different warfronts, confirming that Murais front in Dhale' is strong front deterring the militias.

For his part Deputy Minister of Interior Ahmad Mas'ood provided a report on the security condition in liberated provinces, confirming that security forces have been able to arrest many al-Qaeda terrorist, warning of surfacing a phenomenon of assassinating mosque preachers and religious scholars and of tribal revenge started to rise in Aden city.

The report pointed to seizing Iranian smuggling ship in Yemeni regional waters near Socotra Island, noting to ongoing investigation for details on the shipment and source of supply.

The Ministers Council discussed the fiscal situation and reasons of devaluation of the price of the national currency and effects of this reduction on the national economy and people living conditions.

The council was acquainted by the Deputy Governor of the Central Bank of Yemen Ahmad Abu Bakr on measures taken by the bank for facing this devaluation of the Yemeni Rial. The council directed of taken legal measures to stop the deterioration of the Rial and closure of violating exchange shops.

The council ratified agreements on providing Aden Province with additional power stations and approved a tender of reconstructing houses in Siera District.