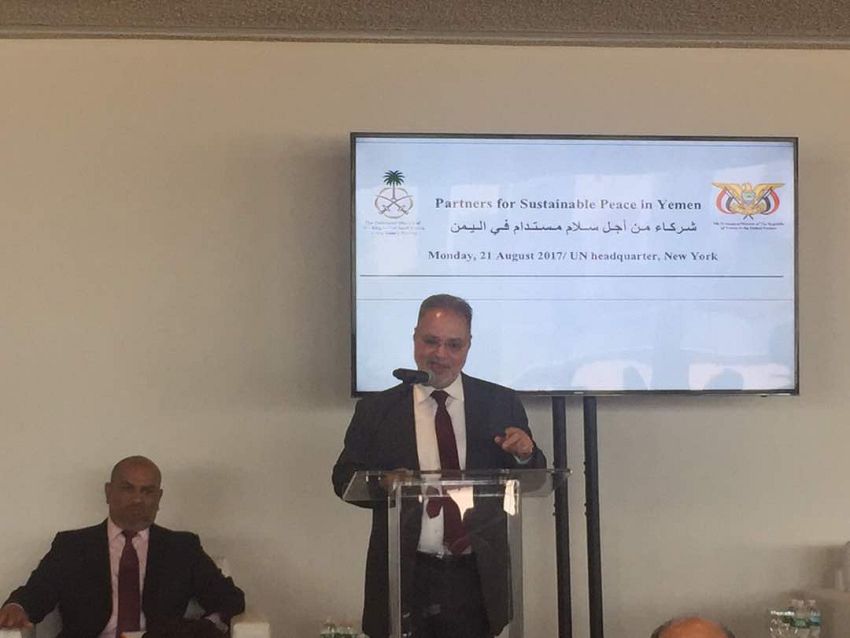 The government has made many concessions and accepted initiatives presented by the United Nations during the past period, in addition to the government's acceptance of all ideas that realize sustainable peace in accordance with the three references while the rebel alliance ( Houthi-Saleh) rejects all these and chose the war on the Yemeni people to implement regional plots and realize Iranian aspirations of hegemony in the region, said al-Mikhlafi in a speech in a symposium on peace held here on the 21st of August.

The symposium is organized by Yemeni and Saudi diplomatic missions in the UN headquarter under the title "Partners for Permanent Peace in Yemen."

Al-Mikhlafi confirmed continuous support to efforts of the UN Envoy to Yemen Ismael Ould Cheikh Ahmad, noting that the government has agreed on latest suggestions on Hodeida and handing over revenues to the Central Bank of Yemen.

He reviewed incidents in Yemen since the eruption of youth public revolution," what happened in Yemen in February, 11 was unique peaceful public revolution in the framework of the Arab Spring…. and ended with a settlement represented in the Gulf Initiative that stated on electing Vice President Abdo Rabu Mansour Hadi as President for the republic for a transitional period and making a national dialogue participated by all political forces and included all issues resulted from Saleh's rule."

"The dialogue was then held and the whole world testified that it was a unique experiment presented unprecedented model."

He added that the dialogue was composed of 565 members, 30 percent for women, 20 percent for youth and all parties and areas were represented. "All issues, including Sa'ada Issue that included six wars by Saleh's regime with Houthis with whom he is making alliance today, and Southern Movement were tackled.

"The international supported and participated in the dialogue, then the dialogue ended, a committee for drafting the constitution was formed and the settlement guaranteed participation for Saleh's party with half of the government and he was not excluded," he said.

What happened in Yemen afterwards, was a full scale rebellion not only against the transitional authority but also against the state, the national unity and against national, Arab and international references as rebels were partners and committed to them; the GCC Initiative, the Outcomes of the National Dialogue Conference and UN related resolutions led by Resolution 2216, he said.

He noted that the rebellion was violent and stormed the capital Sana'a and Kidnaped the Presidential Office Secretary and the Secretary General of the National Dialogue Conference Ahmad Awadh bin-Mubarak, who is currently Yemen's ambassador in Washington, while handing over the draft of the constitution to the president.

The government's permanent choice is peace, said Foreign Minister al-Mikhlafi, confirming that the war was not the choice of President Hadi and the wide alliance of the National Forces for supporting the legitimacy, he said. This alliance consists of all political forces, except Houthis and Saleh.

Then all these forces and Houthi-Saleh's alliance signed the peace and partnership agreement brokered by the UN Envoy then Jambal bin-Omer on the 21st of September 2014, the day when Houthis stormed the Capital Sana'a, to avoid bloodshed despite unjust items included in the agreement, he said.

Regarding the war, he said it started when Houthi-Saleh's militias adopted violence and used weapons to change the political real situation on the expense of the state.

"Some document that Yemen's war started on 28 of March 2015 with kicking of the Firmness Strom and this is untrue as the war started began long before via continuous invade and attempt of assassinating the president in January 19, 2015 and during occupation of the capital Sana'a on the 21st of September 2014,… the Firmness Storm came later to rescue Yemen," he said.

He noted that President Hadi remained in house arrest for a month and then fled to Aden on the 21st of February 2015 with hope to resume more dialogue. Rather, the militias tried to kill the president by bombing his residence by fighter jets; all this was before the storm.

On the 28th of March 2015, the militias invaded Taiz and continued their invasion to Aden and then the president asked the help of the Arab Coalition as responsible president.