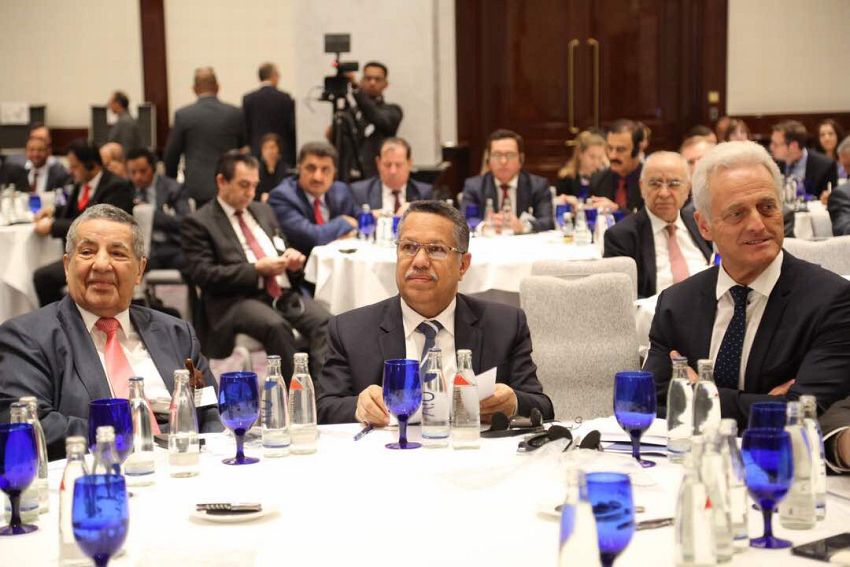 "Yemen will restore its unity as Germany did in 1990 and while we follow up covetously what Germany has achieved of national integration and social peace during steps of unity, we unfortunately experience catastrophic situation in Yemen over political clashes and desire of power and wealth monopoly by a group rebelled against the legitimacy and violently seized the capital and parts of the country, " said bin Daghr in a speech he delivered while participating in the opening session of the 20th Arab-German Business Forum.

He confirmed determination of boosting Yemeni-German relations and German Arab relations saying;" the figure € 50 billion of the trade exchange expresses another deepness of relations between Arabs and Germans, a matter we commit ourselves to improve it in the future."

He reviewed the political process in Yemen since 2011 and the role of Arab and foreign countries, Germany one of them, on bringing Yemen into the dialogue after power transfer in 2012 and lasted for nearly a year. All Yemeni problems were discussed and the dialogue came out with a document signed by all participating Yemeni spectrum, including Houthi group and Saleh's party. The document was sponsored by the United Nations and the Security Council held a session in Sana'a for supporting this document.

The document was followed by a constitution draft included all the outcomes of the dialogue and drafted by all Yemeni political powers including Houthis and Saleh under experts from different world countries, including Germany. The constitution states on a project of Federal Yemen of six regions.

" Unfortunately, what is happening now of clashes and wars are the result of rebellion against these Yemeni agreements, on the day named for handing over the constitutional draft in September 2014 for preparations for referendum and conducting presidential and parliamentarian elections on these foundations, the coup on the national consensus took place and Houthis and Saleh's forces seized the state's institutions by force, stormed government bodies and put President Abdu Rabbu Manshour Hadi and consistence government under house arrest," said bin Daghr.

When the president fled to Aden, rebels started their incursion to the cities of the country, he added, and attacked the Presidential Palace in Aden, where the president was residing in. He talked about interference of the Saudi-led Arab Coalition made under the UN resolution 2216 for upending the coup and restoring the state.

He reviewed conditions of Yemen since the start of the coalition's military operations and the aftermaths of Houthi-Saleh's wars on the people causing catastrophic conditions.

"We, as a state and institutions, never seek the war and never want it to continue, we are peace advocates but we need just and inclusive peace ending the conflict," said Prime Minister bin Daghr.

He talked about his government's efforts on alleviating aftermaths of the war, support of donors for relief in Yemen and plans of his government for reviving the economy and reconstruction.