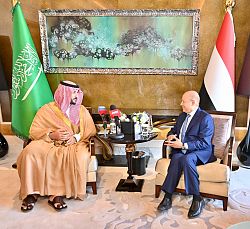 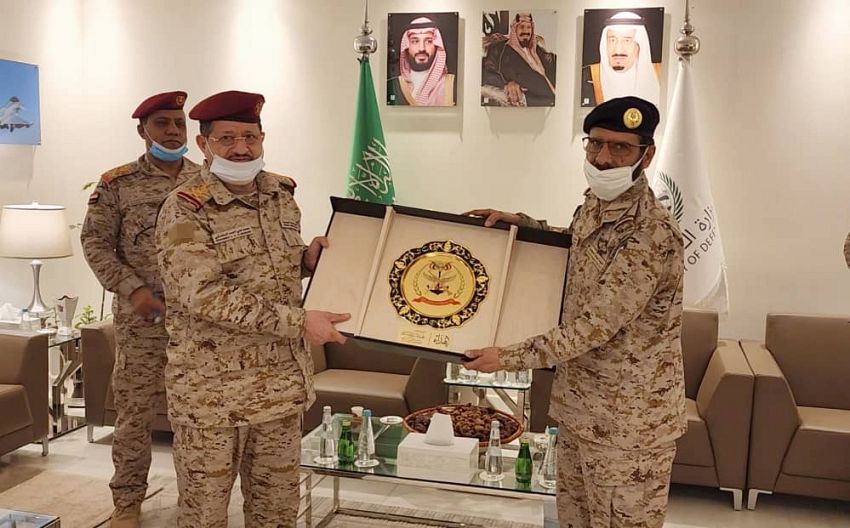 Riyadh – Saba
The Minister of Defense, Lieutenant-General Muhammad Ali Al-Maqdashi, discussed, with the Deputy Chief of the General Staff of Saudi Arabia, the commander of the joint forces, Lieutenant General Mutlaq bin Salem Al-Azima, the field developments along the theater of operations of the Republic of Yemen in light of the UN armistice and the continued violations of the Houthi militia and its repeated attacks on army positions and targeting civilians and civilian objects.

The Minister of Defense expressed his high appreciation for the efforts of the brothers in the Coalition to Support Legitimacy, led by the Kingdom of Saudi Arabia and the United Arab Emirates, and their effective support for their brothers in the army and the resistance in various operational, air, logistical and training fields..

He added that the fraternal standing of the brothers will continue to have an active role in confronting the Houthi militia and its Iranian agenda, restoring stability in Yemen, and confronting Iranian threats to Arab national security and global security. Minister Al-Maqdashi explained that the field situation is stronger today thanks to the support provided by the joint forces, and after the political change that contributed to strengthening the unity of the national ranks and the societal cohesion of the forces and national forces.

He pointed to the militia's continued mobilization of its forces, building fortifications, and its insistence on violence and terrorism, stressing the army's commitment to the international armistice and its keenness on the lasting peace that the Yemeni people and their brothers yearn for. For his part, the commander of the joint forces affirmed the Kingdom's support for Yemen and its pursuit of peace in Yemen, and that it will not abandon its support in all military and development fields.