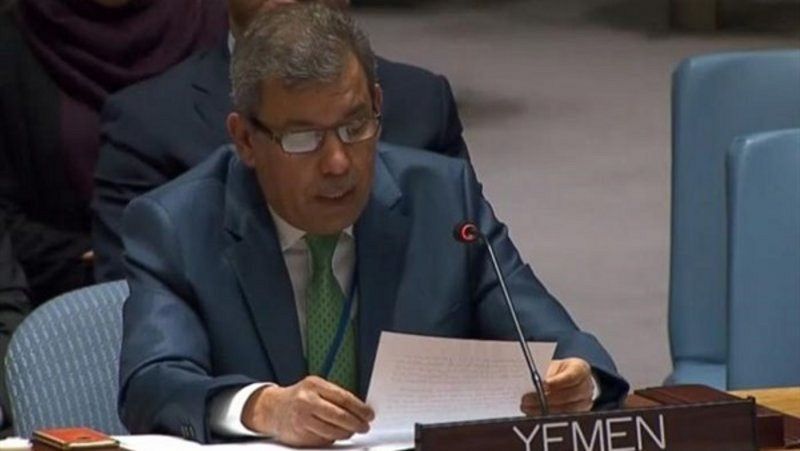 NY - SABA
Yemen’s government has renewed its support to the efforts of the UN peace mediator Martin Griffiths as he seeks to broker peace between the government itself and the Houthi militia.

Addressing a UN Security Council session on the situation in the Middle East, Yemen's permanent representative to the United Nations, Ambassador Abdullah Al-Saadi said Yemen is in favour of engaging into efforts related to bring about ceasefire, economic and humanitarian measures, and resuming the political process in the country.

He renewed the government’s “full commitment to a lasting peace” based on the three agreed upon the relevant terms of reference; the Gulf Initiative, the outcomes of the comprehensive National Dialogue Conference and the relevant Security Council resolutions, foremost of which is resolution 2216 (2015).

He warned, however, that while government is always in favor of peace efforts, the Houthi theocratic militia is undermining those efforts, continuing the military escalation against the Yemeni people by launching ballistic missiles and drones at populated Yemeni cities, especially Marib incurring civilian casualties mostly among women and children.

Al-Saadi also affirmed the government's commitment to accelerating the implementation of the Riyadh Agreement with the STC rebels in accordance with the specified time plans.

He said that a new government is being set up and will consist of accomplished members with experiences and command of the existing challenges. The government will work on meaningful reforms, drying up the sources of corruption, and activating state institutions to fulfill their duties towards citizens.

In this regard, he appreciated the role of the brothers in the Kingdom of Saudi Arabia in standing by the Yemeni people to alleviate their suffering in all different stages, and their keenness for the success of the implementation of the Riyadh Agreement.