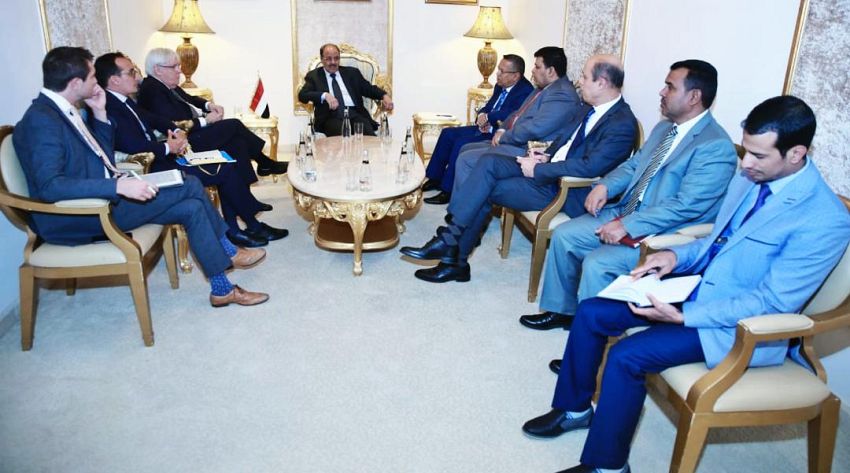 The meeting aimed to discuss the UN's underway good offices to reach peaceful solution in our country.

The Vice President expressed his appreciation for the efforts have been exerted by the UN's envoy for establishing sustainable peace and alleviating Yemenis' suffering. He reaffirmed that legitimate government headed by President of Republic, Commander-in-Chief, Field Marshal Abd-Rabbu Mansour Hadi has been committed to seek for durable peace that is based on the GCC's Initiative, its operational plan, outcomes of National Dialogue and UNSCR 2216, to put down the coup and restore the State.

(Lt Gen) Mohssen stated that the legitimate government is keen on the Yemenis' interest and making peace. To this end, the government dealt constructively with all peace's initiatives and talks, but the Houthi putschist militia has proved the opposite, responded recklessly to peace efforts, evaded planned consultations under unsounded reasons, pays no attention to the UN's efforts as it happened in Geneva's recent consultations.

The Vice President said:" Continuation of Houthi miliatia's oppressive policy against the citizens in the militia's controlled regions, militiamen's atrocities against the civilians including women students, continuous sectarian cannoning, mobilizing for war, looting the nation's resources and destabilizing regional and international security all suggest that the militia is committed to the option of war and violence, doesn't care about Yemeni bloods and souls".

He demanded Intel to press for implementing international resolutions and bringing the rebels to negotiating table.

For his part, the Prime Minister presented an overview on the government's efforts aiming to re-normalize the situations and reduce the Yemeni's torment, citing practical measures taken by the central bank to manage the economic crisis which requires joining efforts, support and cooperation by brothers and friends to get rid of.