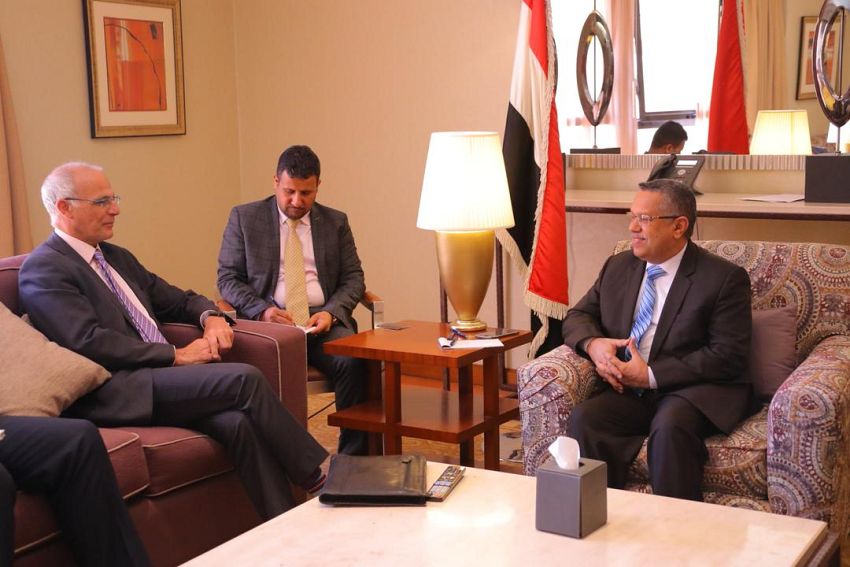 
Prime Minister Dr Ahmed Obeid Bin-Dagher voiced the Yemeni government's and peoples' appreciation for the good offices have been made by the British friends in the United Kingdom (UK) in order to re-establish security and stability in Yemen.

As he met Thursday with the British ambassador to Yemen Michael Aron, the Premier praised the British steady support for the Yemeni legitimate government in different international forums; deeply appreciated UK's support for maintaining unity, security and stability of Yemen.

Dr Bin-Dagher welcomed the newly British ambassador, promising him all support from the Yemeni government to make his mission a successful one.

The Prime Minister detailed the British diplomat on the situations in the Yemeni arena and the UN and international efforts aiming to bring about a political solution to the ongoing war. Bin-Dagher and Aron jointly stressed the importance of making the UN newly appointed envoy's mission successful.

In this regard, the Prime Minister stated that the legitimate government will deal constructively with the Griffith's good offices as it happened it did with the UN's previous calls and suggestions, provided that the militia proved good will… and negotiations should not be just to buy the militia time to rearrange its cards.

The meeting also touched upon the government's underway efforts aiming to re-normalize situations in the government-held regions and counter-terrorism.

Bin-Dagher said:" Arab Coalition intervention came in response to a call by the legitimate Yemeni President after the Houthi militia took over several provinces, reaching to Aden, Taiz and Marib.. So, it is the Houthis who have been the factual aggression on the Yemeni people because they took weapons against the State, crackdown the citizens and posed existential threat to Yemen, Arabian neighbors and threatened the international marine navigation, all of that to carry out Iran's agenda nd scheme in the region with the aim of extorting the international community".

For his part, the British ambassador has reiterated his country's support for the unity, security and stability.