Sustainable peace not achievable if Iran does not stop interfering, Al-Yamani 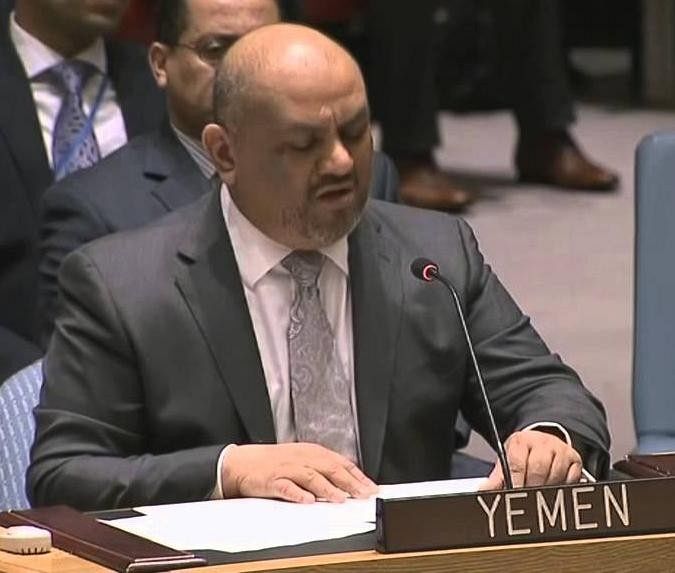 NEW YORK-SABA
Yemen's Permanent Representative to the UN Khaled al-Yamani said that government has always been of the belief that war cannot be the way to resolve the Yemeni crisis.

In a statement he presented at the Open Session of the UN Security Council today, he said that as everyone knows, Yemen did not resort to the use of arms even when the Houthi militias took control of the capital Sana'a but offered concessions under a controversial deal that it signed and the Houthisbacked down from it.

Al-Yamani said that a sustainable peace will not be achieved if Iran does not stop meddling in the affairs of Yemen and the region, and today the world is required to take a unified stance to curb those expansionist cravings.

He asserted that the three references for peace (the Gulf initiative, the outcomes of the National Dialogue, and the UNSC Security resolutions concerning Yemen) have the elements for a sustainable lasting solution to the Yemeni crisis.

As per the UN resolutions, the militias are required to withdraw from all cities and hand over the weapons they control to the state.

He reminded of President Hadi's note in his recent address to the UN General Assembly that the militias' missiles fired on Saudi Arabia or threat to fire against the United Arab Emirates, with a range of more than 600 kilometers, are Iranian-made rockets. For such missiles have never been in the Yemeni army's arsenal in previous times.

He also reminded of President Had's offer of peace in that address.
He said that the Yemeni government, with limited potentials, is facing extremely complex circumstances and enormous challenges posed by the war in the economic, security and services sectors and the resulting destruction in all aspects of life.

He pointed out that Yemen needs a lot of international support to maintain security and stability, re-activating services in the liberated areas, for reconstruction, addressing of security irregularities and completing the counterterrorism efforts.

The war cannot be stopped unilaterally, he said. Halting the war requires the coupist party's agreement on return to the negotiations and acceptance of the fixed terms of reference for peace.

He said that Yemen still needs support and assistance because of the high levels of poverty and food insecurity especially in areas under daily bombardment by the coup militias, mainly the city of Taiz that has been under the militias for more than two and half years.

And other militia-controlled provinces, where these militias refuse to pay salaries of public employees.

He appealed to the international community to pressure the coupist party to accept the initiative put forward by the UN Secretary-General's envoy to Yemen Ismail Ould Cheikh Ahmed on Hodeidah, which goes beyond the port of Hodeidah to address important steps for building confidence.

Al-Yamani called on the United Nations leading membersto assume their responsibility in Yemen by exerting pressure on the coupers to implement the UN Security Council resolutions and to make real concessions so as to prevent further blood shedding and to allow humanitarian assistance access to the areas they control.

He stressed that the Yemeni government is more concerned in alleviating the suffering and has repeatedly offered to reopen Sana'a Airport for humanitarian flights, provided that the militias evacuate it and hand it over to be re-operated by the pre-September 2014 staffunder supervision from the United Nations.