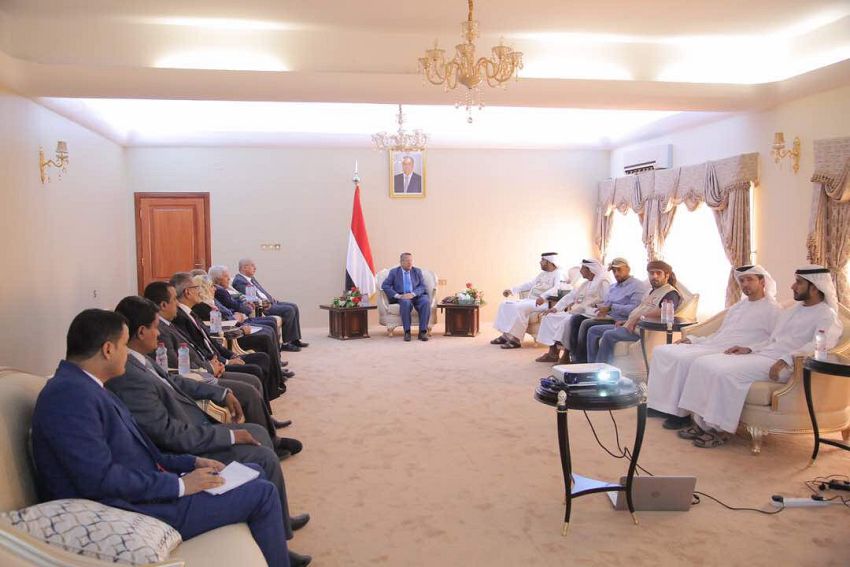 ADEN-SABA
Yemen's Prime Minister held on Wednesday a discussion with Mohammed Al-Kotobi the director of the Emirati Red Crescent (ERC) on the projects that the ERC is carrying out in the temporary capital, Aden, and other government-held areas.

The Premier Dr. Ahmed Obeid bin Daghr spoke highly of the United Arab Emirates' attitudes toward Yemen and the government.

The ERC director acquainted the premier minister about the ERC's activities it has achieved thus far, including the reconstruction of houses and schools destructed by the coup Saleh-Houthi militia.

The ERC conducted a range of other projects in varied fields; health, roads, water, sanitation and public transportation.

The ERC director reviewed a specific list of projects that the ERC achieved, on the top of which were the construction if 17 residential homes in Mokha and the rehabilitation of healthcare centers and hospitals in Aden, Lahj, Dhale'a and Taiz.

The ERC director also gave the premier an account on the projects of 2017 that the ERC intends to implement, including a 100 MW power plant and maintenance of power supply lines in Aden.

These project are scheduled to be implemented in less than three months. Also an extra 10 MW power supply is supposed to be added to the electricity current of Lahj with ERC support in the coming few days.

The prime minister issued directives to have a liaison officer be appointed to regulate the mechanism of cooperation and the nature of projects that the brotherly United Arab Emirates offers to Yemen.

The ERC director, on his part, affirmed that the UAE offered assistance whether through the ERC or Sheikha Fatimah Association, will continue in support of the Yemeni people and the legitimate government with a view to re-normalizing life in the government-held parts of Yemen.

The Prime Minister's meeting with the ERC director was also attended by senior state officials including the ministers of Health and Population, Local Administration, Planning and International Cooperation, Education and Social Affairs.